Marilyn Manson and Ravi Zacharias are the Same 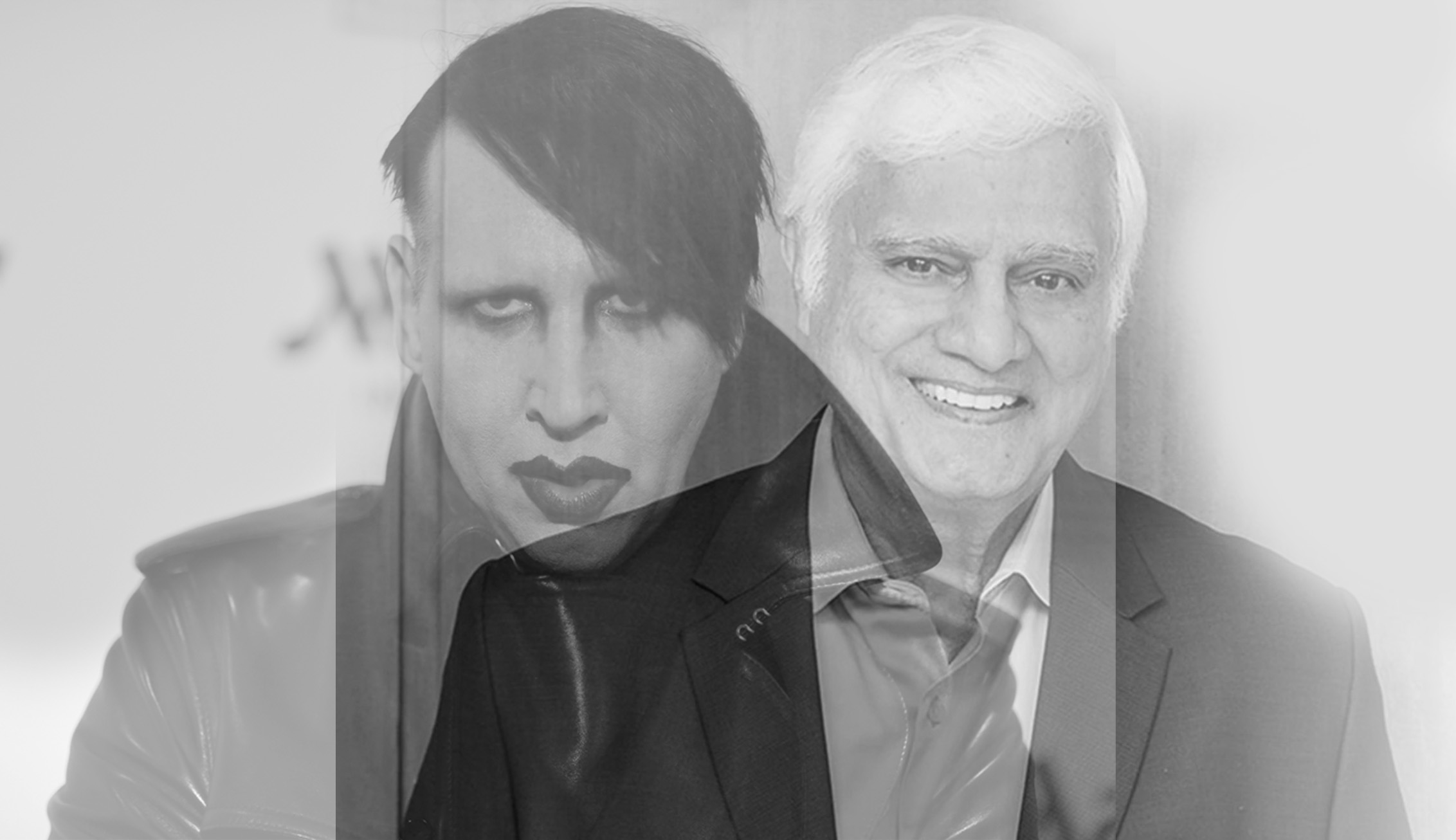 200 or more photos of naked women, many very young, found on personal devices. Five massage therapists, under his employment, reported that he had touched or rubbed them inappropriately, and four said he would touch his own genitals or ask them to touch him. Eight said he would either start the massage completely nude or remove the draping sheets during the treatment. “Don’t tell,” he’d remind them. “My downfall would cost millions of souls a chance at eternity.”

Women are great at don’t tell.

Different stories from different women, many very young, spanning the length of his career. A young wife, coerced into marriage, calls sex traumatic, violent, abusive, “it almost destroyed me”. More than one girlfriend describes being chained up and electrocuted. It’s consensual, always, he claims. “I have fantasies every day about smashing her skull,” he famously said. But it’s art. It’s an act. It’s the character. If you speak out about it it’ll ruin his career.

Women are great at not ruining careers.

Don’t come at me that Ravi Zacharias and Marilyn Manson (Brian Warner) aren’t the same.

Raised deep enough in the Patriarchy of Evangelical 1980s-1990s America that I could check it’s prostate, I see the red flags in both of these men’s careers, lives, and relationships and they fly the same color, from the same takeover territory of “the man’s way or the highway.” Raised deep enough in “be a helpmeet to your (future) husband” culture to know hundreds of women in abusive relationships with their fathers, their brothers, their pastors, their husbands, and (bravely) their ex-husbands, I can point out that when it walks like a duck, quacks like a duck, when allegations roll off it’s back like a duck, it’s probably a man in power standing on the backs, bloodstains, and #metoo stories of vulnerable and coerced women.

Ravi Zacharias was born in 1946 in Chennai, India. At the age of 17, he attempted suicide, but upon survival he felt called to the ministry of the Christian faith. His family was among the early Indian Christian’s — having converted to the faith five generations before his birth and were instrumental in the first Malayalam translation of the Bible. Zacharias immigrated to Canada at the age of 20 and began his ministry, which took him to Vietnam, during the war. He launched the globally successful and impactful Ravi Zacharias International Ministries (RZIM) in 1984. Zacharias was a fierce apologist and a prolific writer — willing to debate and discuss any number of theological issues from a lens of “east meets west.” In 1992, he expanded into academia, launching the Veritas Forum, hosted on the campus of Harvard University. In 2004, he established the Oxford Centre for Christian Apologetics at Oxford University, where he was an honorary senior research fellow between 2007 and 2015. Zacharias was married to his wife for 48 years at his death, and died in 2020 of aggressive spinal cancer. Ravi Zacharias wrote, ““Beginning well is a momentary thing; finishing well is a lifelong thing.” The only problem were the pesky allegations that left his life’s work up for question and his impact wholly incomplete.

Brian Hugh Warner (Marilyn Manson) was born in 1969 in Canton, OH — the son of a veteran father and an Appalachian mother. Forced to go to Christian school, Manson rebelled against the teachers who restricted the music he could listen to, the classmates who beat him up for “being gay,” and the parents who raised him in the silence of the aftermath of violence. In 2015, Manson told reporter Carole Cadwalladr, “I think he was selected for being good at what he did — and that was killing people.” In Cadwalladr’s article for The Guardian, she surmised, “when you realise that he spent the first 18 years of his life in a household dominated by the after-effects of violence, Marilyn Manson and his music, his obsessions, his sense of alienation, his fascination with killing, his insistence on living outside the strictures of mainstream American society, suddenly makes much more sense.” Manson’s music career formally began in 1989 though the height of his career was in the mid-90’s. He’s continued to be a prolific cultural icon, known for saying and doing extreme things — more recently for a second career in acting. Many reporters have attempted to unmask Manson — looking for the man behind the art-installation he presents as. The only problem was that the extreme fantasies he jokingly talked about turned out to be actual abuses of women who trusted him with their lives.

Both men in power. Both men esteemed in their tradition and their trade. Both men with everything to lose. Both men whose egos and fame hid them in plain sight. Both dangerous. Both harmful. Both violent perpetrators of sexism and misogyny at the highest levels.

Thank god the women got out alive.

In today’s “cancel culture” — we are quick to decry the immediacy of destroying a career or impact because of “one wrong thing,” or “a few allegations.” I’d argue that “cancel culture” is what we teach our children, early on, and call “consequences.” When we show ourselves to be awful or untrustworthy, we are considered awful and untrustworthy. People don’t want to be around us, to consume our energy, to pay for our lifestyle, to take in our ugly. Associations fall off. Likes/Retweets/Views drop off. The natural consequence to being exposed for crimes is the dissociation of those who thought you were above criminality.

Do I believe that Ravi Zacharias may have led thousands of people to follow the Way of Jesus? That the reach of his ministry was far — offering shelter and hope to those in need? That men and women who worked alongside and under him fully trusted that they were doing the work of The Lord? That his wife loved and honored him, suspecting him of no unfaithfulness? That his children believed him to be an honorable man? That lives, somewhere, somehow, were absolutely made better by his existence?

Do I believe that Marilyn Manson’s weird aesthetic, outsider-esque persona, and goth trappings saved the lives of countless kids who felt out of place until they found a home in his music? That he pushed the envelope of what entertainment and sound could be? That he was uniquely important in discussions of fantasy versus reality, of output and impact? That he is a talented actor and icon in creative, theatrical, and musical contemporary scenes?

Of course. These things can live in tandem. The duplicity of these men’s lives and contributions allow for them to have given life and impacted for good on one hand, and to have taken lives and impacted with great harm on the other.

But to celebrate the salvation stories is to neglect the hard reality that Ravi Zacharias paid a woman to never speak of his blackmail and abuse. That he photographed and raped and abused young girls in Asian countries and married employees back home. That he struck fear into the hearts of the women he employed and used their bodies for his own pleasure. That he used his power and position to demean, destroy, and demoralize women who came into contact with his desires.

To celebrate Manson’s music for it’s edgy grit and for wrestling with it’s demons is to neglect the hard reality that Marilyn Manson put women through hell on earth. That he coerced and manipulated them, tortured and scarred them, and threatened them with death. That he told us he felt and did these things, throughout his career and in multiple interviews, but that we ignored the claims as art and allowed him to continue persecuting, overpowering, and being predatory towards women who came into contact with his perversions.

Marilyn Manson and Ravi Zacharias are the same. Men sick on power and fame, who operate under one united belief: women are great at don’t tell.

Thank god the women got out alive.